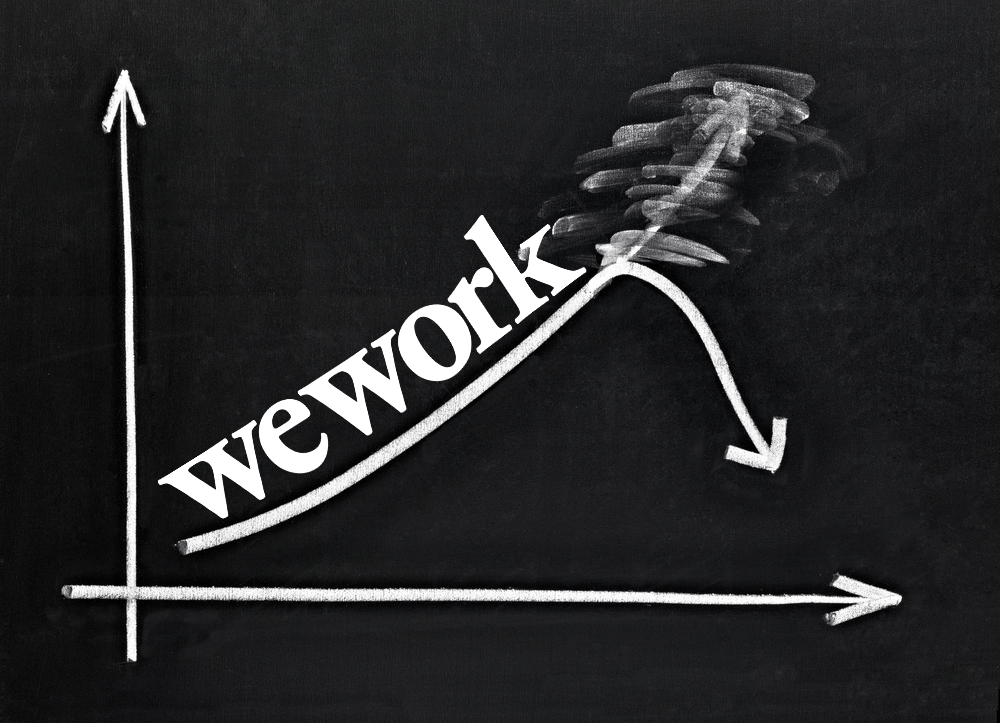 After canceling its IPO and reducing its valuation from $47 billion to $8 billion, WeWork may have become the poster child for ‘valuation reform,’ another cautionary tale for companies and their enablers in the financial community who want to ride the next tech unicorn.

WeWork’s valuation, fueled by gigantic investments by Japanese conglomerate SoftBank, was of a species with those seen by pure-play technology companies, but WeWork isn’t a tech company. Some would argue it isn’t even a ‘tech linked’ or ‘proptech company,’ but rather a property company, like many of its competitors, and that it should be valued accordingly.

Take for example IWG (formerly Regus), which has more square footage of office space, earns more revenue, and indeed turns a profit. IWG has a market cap of about $4.6 billion, a mere 10% of WeWork’s initial valuation. The difference seems to be how WeWork describes itself, using very tech language, positioning it as a ‘space-as-a-service’ company.

Is the jig up?

Why would SoftBank invest billions of dollars in a company that is clearly not in the tech space, and indeed carries all the risks typically associated with the capital-intensive real estate business?

Bill Gurley, General Partner at Silicon Valley venture capital firm Benchmark Capital, argues that higher valuations are justified for companies that are vying to be the leader in their markets. WeWork may be a disruptor in its own sector, but according to the Harvard Business Review, a successful tech company can transform whole industries, achieve rapid expansion of scale and scope, and make enormous profits, without requiring significant capital investments – not the case with WeWork.

Tech companies share a number of unique characteristics that differentiate them and support larger valuations, including:

Modest variable costs. Alphabet, Airbnb, Yelp, Uber, Twitter, and Facebook have virtual models that can be scaled exponentially, quickly, with minimal additional costs. Even if WeWork were to become the largest and most successful player in its business, it would have enormous operating expenses and, consequently, thin profit margins.

Low capital investments. WeWork has much higher capital requirements than a typical tech company with similar revenues. WeWork rents its locations, which are now to be capital assets. It must also develop, furnish and maintain those facilities to the highest-quality levels to distinguish itself from other office providers.

Network effect. For most tech companies, the bigger the network, the more valuable the company. Any customer joining Uber or Amazon improves the value proposition. A WeWork member doesn’t need the network to collaborate. LinkedIn is better for that.

Ecosystems that enable low-cost expansion. WeWork attempted to enter other areas of the real estate market, including apartments, but this required them to make large capital investments and expand customer acquisition outside of their natural network. The same doesn’t hold true for a company like, for instance, Uber, which has been able to extend offerings like Uber Eats to its existing base with minimal additional investment.

The WeWork situation seems to have marked a turn in investors’ focus away from betting on revenue growth as a value driver to bottom-line profit generation. Does this mark the beginning of a trend? Looking at investors’ reactions to the latest round (Q3 2019) of earnings announcements from some household names in pure-play technology, the answer appears to be yes.

Several highly valued growth companies reported better revenue than forecast only to find that investors dumped their stocks after disappointing earnings were reported. Most notably, Google owner Alphabet saw revenue that was better than expected but earnings below analysts’ predictions and saw an immediate fall in its share price. The opposite was true for Tesla, which reported worse than expected revenue but an unexpected profit, with share prices soaring. Only time will tell if the trend will continue, but the shock of WeWork’s failed initial public offering has certainly jolted investors away from the fantasy that easy finance will last forever.

Rooney Nimmo has a great deal of experience assisting companies through the fund-raising process in the US and UK on both sides of the equation – funds, investors, founders, and business leaders, including managing exits. If you are considering your next round of financing and have any questions, we would be delighted to help. Drop us a line here.